Graduation Announcement:
A Few Miles to Go Before that Leap 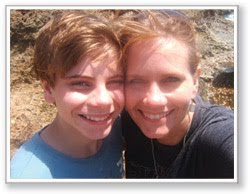 Among our Crinkled staff members, I'm the one with the oldest kid. So naturally, as the most- of the least-qualified, it falls on me to talk about graduation. "You're the closest," they told me, which in no way made me feel better about how close "graduation" really is to "grown." I'm still dealing with the fact that my child is old enough to drive a car. How can I be ready for him to graduate from high school?

But we've got a little ways to go yet. And not just chronologically. To be honest, my son's grades aren't the greatest – we've been plugging through freshman year so far with earnest hopes and a not-a-few prayers of making it to 10th grade without summer school.

As wonderful as he is, my child is not the scholarly type. In our ongoing battle with ADHD, there were times his teachers were just thankful he was near his desk. It’s not to say he hasn’t been concerned about his schoolwork; it was just a year or so ago he approached me with the exceptional scholastic challenges he was encountering in middle school. “I’m telling you, Mama, it’s pretty tough.” – (deep breaths, dramatic pause) – “I think I’m gonna have to start studying for tests.”

It’s amazing how different kids can be from their parents (or at least one of them). School came easy for me; it was real life that always freaked me out. I’m still in awe of it, though I think I’ve gotten a better handle on it after a few good decades of practice.

It still amazes me how, with limited skills and no formal training, I’ve managed to feed, clothe, correct, nurture, train and hopefully inspire another human being for 16 years already. Like most parents, I feel totally inadequate for such a prodigious vocation. And as the sun of my son’s childhood begins to set, I hope the principles I’ve shared and guidance I’ve given will have him prepared, as much as he can be, for the world that awaits him beyond graduation.

If all goes well, he’ll make that leap in the spring of 2014. He’ll cross the platform and toss that cap in the air; I’ll send out the fancy graduation invitations, and weep profusely as he receives his diploma.

I’m not going to break out the Kleenex yet, though. We’ve still got some ground to cover and grades to pass. And it’s fair to say, a little more growing to do.